It’s hard to believe one week of November, and thus, one full week of NaNo is already behind us. I can’t believe it. Next thing I know, it will be over and I’ll be putting up a Christmas tree!

So, how’d week one go? Well, for me, it went better than expected, all things considered. This week was busier than I thought it would be. (I thought this was going to be my “quiet” week in November. Oh, how wrong I was.) Thus, with not anywhere near as much time on my hands as I had hoped, and only two dedicated writing sessions this week, I’m happy to report that my word count is not abysmally off par.

However, I’m not that concerned about this for several reasons. One, it’s still so early. Two, on Thursday, I attended my first local write-in with NaNoRDU. Last year, I did NaNo solo, and didn’t discover the community until post-NaNo when I attended a few of my local chapter’s off-season events and joined a critique group. So, this year, I was eager to get a taste for the real-time events and headed to my first write-in.

In just a two-and-a-half-hour write-in, I wrote about 4,000 words. That was partly thanks to being in a good part of the story, but also thanks to the mutual support of being with a group of writers and doing several rounds of word sprints. I get a little competitive, so word sprints really help me achieve more than I would just sitting down at my computer and writing with no particular goal in mind. And do you see that fabulous “library card”? It’s what my region uses for motivation. You get stickers (!) for doing things like attending write-ins, hitting par, and winning sprints. The five-year-old that still lives inside me loves stickers for rewards. 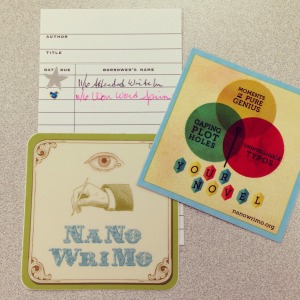 Now that I know I can churn out thousands of words under pressure, I know that I can catch up. I’m also not as worried with my lagging right now because I’m very engaged in my story. I’m itching to get back to it. I’m not avoiding it because I’m not sure where it’s going, I just haven’t had the proper amount of time needed to write it. So, I’m confident that in this upcoming week, which will admittedly still be crazy, I’ll get back on par and back up to speed. Who knows, maybe I’ll get ahead in NaNo, for once. What a novel idea.

Also, I don’t know what it is about doing something as wild as NaNo, but I tend to be more creative when I’m writing on a regular schedule. I don’t know if it’s all the imaginative juices rolling around in my head, seeking an outlet somewhere, but I’ve definitely gotten more in touch with my artistic side so far this month. I started off November, after pounding out my first thousand words, by baking some pomegranate scones, out of the blue. Then on Tuesday night, I was already signed up for one of those “wine and design” paint classes (my coupon was expiring, and I had no choice but to do it in November, much to my chagrin) and I painted something I was decently happy with (I’m no painter, really). And then yesterday, I decided to chop off all my hair, mostly on a whim. (Pictures forthcoming.) And this morning, I made a chocolate pomegranate tart. (I’ve been quite into pomegranates lately.) If you’re curious about all these non-NaNo creative adventures, check out my Instagram. It’s been quite a fun month, even beyond my NaNo project.

Oh, and the last reason I’m feeling confident? I’m going to a “Bowl-a-Thon” write-in today, where all you do is write and write and write in between your turn to bowl. Instead of winning by bowling constant strikes, a team wins based on how many words they get during the round of bowling. (Which is good, because I’m a terrible bowler.) Awesome, right? I have a feeling that should catch me back up to speed pretty quickly. And even if it doesn’t, I’ll be having a good time with some fellow Wrimos!

Wrimos! How are you doing? How does week one feel? Are you on par, ahead, behind? Are you over the moon in love with writing or more like ‘meh’? Let me know in the comments! The encouraging community of NaNo is here to cheer you on!