This trip was a bit of a whirlwind since we were packing tourism into my brother’s wedding weekend. While we had both been to New York City on separate occasions, this was the first time I had visited NYC with my husband, and we had such a good time exploring the city together.

I can’t say it’s a place I want to live, but it is a place I love visiting. I could keep making trips there for the rest of my life, and I don’t think I’ll ever see it all. We flew into La Guardia on Friday, spent the night in Times Square, woke up early Saturday to go to New Jersey for the wedding festivities, and then on Monday and Tuesday, we were back in NYC to hit the town.

Our trip began in Times Square, thanks to a credit through the app Hotel Tonight. Booking with the app, we stayed at the snazzy ROW NYC, just a block off Times Square, for about as much as we would pay to stay in an average hotel in an average city — it was more than a 50% discount. (A totally unpaid and very honest plug for Hotel Tonight.) Hotel Tonight can be a hit-and-miss game, as you have to book your hotel day-of to get the deal, but it worked well for us. ROW NYC was modern and chic, and in a fantastic location.

As a side note, we somewhat accidentally stumbled into Cafe Cranberry on the night of our arrival. It was approaching 2 a.m. and we hadn’t had dinner, it was raining, we were starving, and it was open, so we probably would have eaten just about anything, but we had some delicious garlic knots and a few huge slices of a meat and jalapeño pizza. If you’re looking for a quick, cheap, very late bite, it’s a great spot and it’s open 24 hours. And, here’s a quick snapshot of Times Square when we first came out of the metro, before we found the cafe. Unfortunately, I didn’t get any better shots, as we got in very late, and didn’t spend a lot of time there. 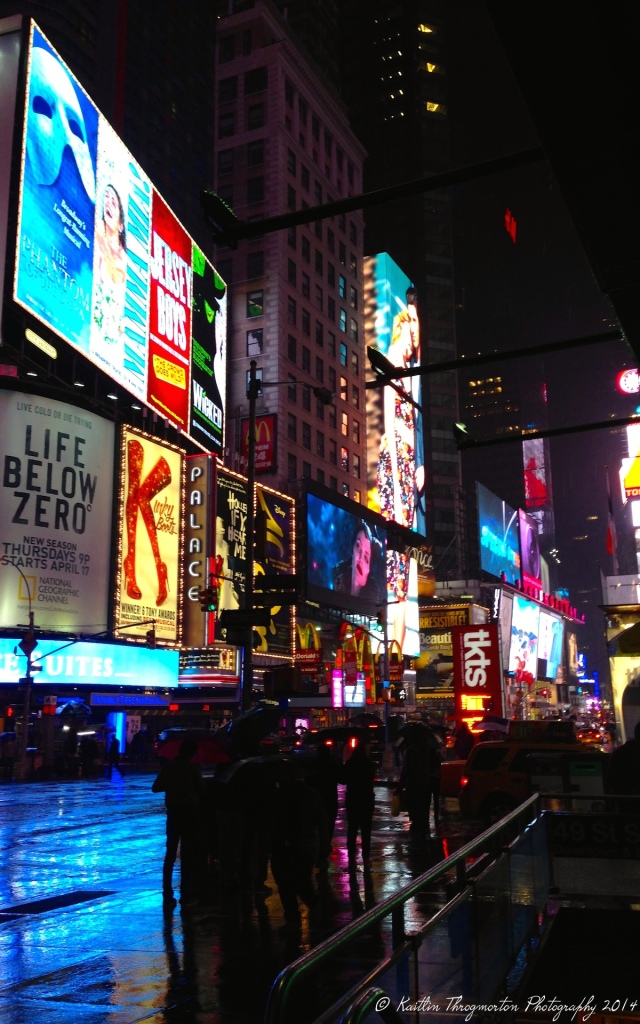 The next morning, we took a brief tour of the Times Square area and met up with a friend of ours from Boston who also happened to be in NYC for the weekend for a wedding.

Before heading to New Jersey, we ate breakfast and had coffee at Dean & Deluca, which serves great coffee and fresh, local baked goods, along with lots of other foods. They also serve Doughnut Plant doughnuts. I’m not too into doughnuts, especially not cake doughnuts, but the Black Out cake doughnut looked so decadent that I couldn’t resist. It was perfectly rich and moist, and I highly recommend them, even to non-doughnut lovers.

After fueling up on sweets and caffeine, we made the trek to New Jersey, which required a bus and two trains, despite the relatively short distance in mileage. But, even with confusing ticket kiosks and a very late bus at the Port Authority, we made it in plenty of time for the rehearsal dinner. The dinner was at the Liberty House, an incredibile restaurant in its own right, but with an even more incredible view.

After the wedding festivities ended, we came back to the city and stayed in Chelsea, this time using Hotels.com. The Chelsea neighborhood is perfect for anyone who wants convenient access to NYC on a tighter budget. It’s not in the heart of Manhattan, but you can be there in just a few minutes via the metro. I also loved the charm of Chelsea, which I wasn’t familiar with before this trip. It’s quieter and less flashy than Manhattan, but still full of life.

Just a few blocks from our hotel, we found the first Shake Shack ever in Madison Square Park, and treated ourselves to a delicious shake, which was some mix of caramel and toffee that I don’t quite remember, but it was why-didn’t-we-get-two-of-these good. We held back, though, because next up was Birch Coffee, where we shared a cold brew and took a break from the heat for a while.

After relaxing and cooling off, we continued our walk, stopping at the New York Public Library (which was closed because it was Labor Day, much to my chagrin), walking through Bryant Park, and finally ending up at the shipyards, where we had hoped to experience Fleet Week. Unfortunately, we didn’t know that the lines closed before access to the ships did, and we missed the cut-off by just a few minutes. Unfazed, we walked just a few blocks to a ramen noodle shop which had rave reviews: Ippudo West. Pro-tip: go at three in the afternoon and you won’t experience the hour or more wait online reviews warned us we would experience. Although, after eating Ippudo’s noodles, I don’t think I would’ve minded the wait.

It was our first experience with true ramen noodles, and it’s definitely not the ramen you’re imagining from college. Thick, flavorful noodles swim in a rich, complex broth, surrounded by accompaniments like a soft-boiled egg, chives, ginger, and pork (chashu in Japanese). It was so incredible, I wondered how I’d made it twenty-five years without eating real ramen.

After we devoured our noodle bowls (which were huge!), we decided it was time for a nap. We rode the metro back to Chelsea and passed out for a few hours. When we woke up, we headed over to Greenwich Village to see a friend of my husband’s, and on the way, we ate at Aaron Sanchez’s restaurant, Tacombi. Avid fans of the Food Network show “Chopped,” we had done research on our favorite judge’s restaurants in New York City — for those who have to know, we’re big fans of Aaron Sanchez, Geoffrey Zakarian, Amanda Freitag, and Alex Guarnaschelli — and Tacombi seemed like one of the most affordable and delicious options we could sample. The verdict? It’s wonderful, and very inexpensive! Just a few bucks for a taco. I had a chorizo breakfast taco and some horchata, and greatly enjoyed both.

The next morning, at the recommendation of a friend, we checked out The Highline. This turned out to be my favorite part of our whole trip.

While I think I’ll always love Central Park, this might be my new favorite greenspace in NYC. I love that they restored a derelict railroad to create a walking trail featuring beautiful greenery, art, and shops. Because it’s constructed over an old railroad, The Highline is raised — hence its name — and it offers some lovely views of the city as you’re about two stories up while walking it. 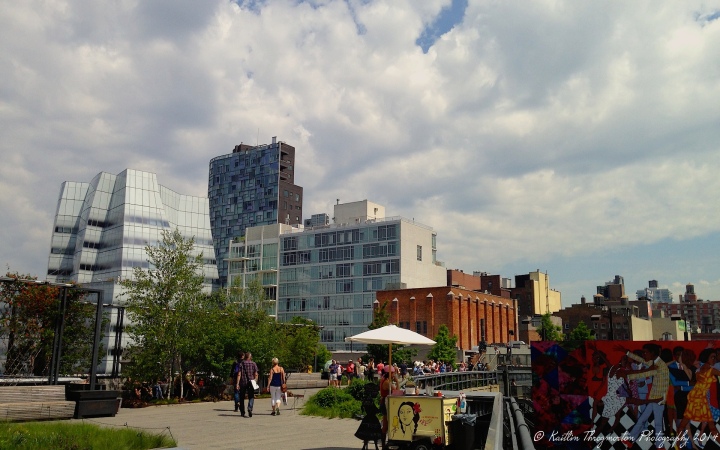 At the end of The Highline, there are multiple outdoor shops, including a BBQ cart, an ice cream shop, Blue Bottle Coffee, and a few others. We enjoyed a delicious cup of iced New Orleans coffee. In fact, we enjoyed it so much that we’ve used Blue Bottle’s recipe on several occasions to make NOLA coffee at home, and it’s so good! 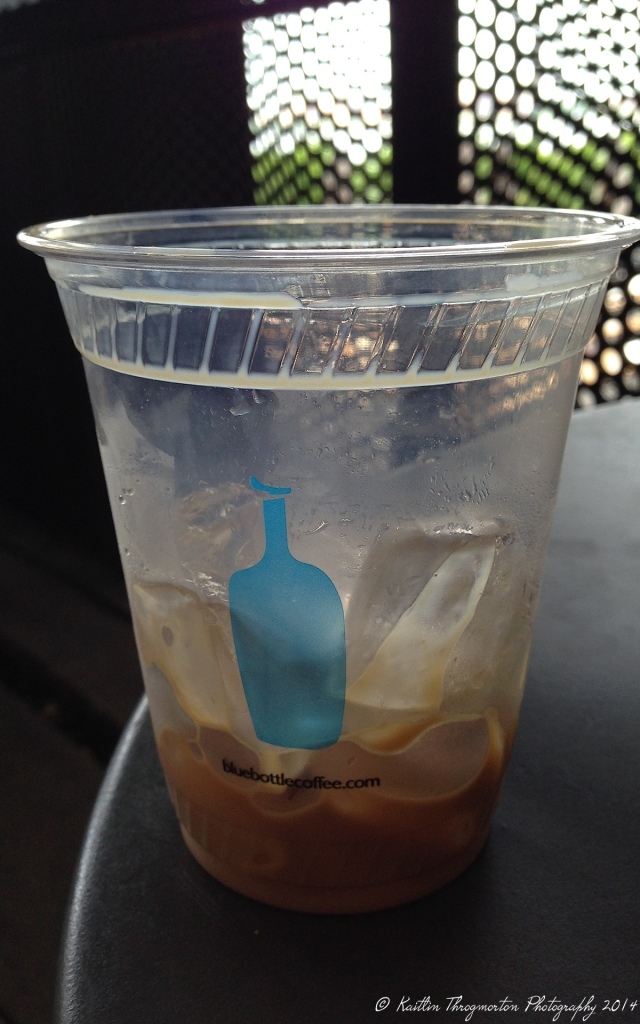 It didn’t occur to me until a few days ago that I would be wrapping up this post around the anniversary of 9/11. As I share my most recent experiences in New York City, they can’t help but be shadowed by that day, 13 years ago. We visited the 9/11 Memorial on this trip, and I’ll never be able to go there without feeling a great sense of loss, but also of hope. The memorial is a beautiful, and yet sobering experience, especially since I can remember what it looked like the first time I visited New York City in 2009, when it was still a disaster zone.

The memorial pools are huge — much larged than I had expected — though I suppose when they rest over the base of what used to be the two tallest buildings in the world, it’s not much of a surprise. At first glance, they are pretty to look at, but I felt haunted by how massive they were, how the water fell into an abyss in the center that extended so far below the ground that you couldn’t see it, and how the names wrapping around the edges looked endless. It was a paradoxical experience of marveling in the peaceful transformation of the grounds, and mourning what used to be there, what happened there.

In the second photo, you can see the 9/11 Museum in the background of the pool. We didn’t have the time we thought we would need to see the museum, so we saved it for another day.

This last photo captured both the serenity along with the sadness of the place – the hope mixed with the heartache.

We also saw the new Freedom Tower, which will be the new One World Trade Center, and is right across from the 9/11 Memorial.

Before we had to leave NYC that evening, we walked a few blocks from the 9/11 Memorial down to Tribeca Park. A storm was coming into the bay, which made for a great final shot of the skyline. It’s kind of neat that we started our trip on this side of the bay, and ended it on the other, both with great skyline sunsets over the water. New York, we’ll be back. 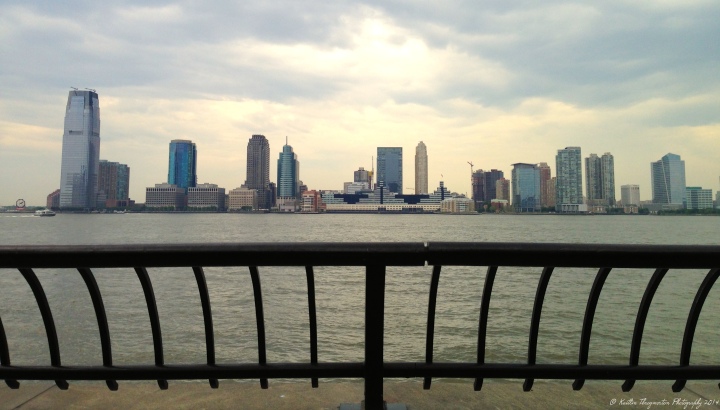 HAVE YOU EVER BEEN TO New York City? TELL ME YOUR FAVORITE SPOTS! AND IF YOU LOVE TRAVELING, CHECK OUT MY OTHER TRAVEL POSTS.

This blog focuses on adventure wherever it can be found, whether across the globe or in the pages of a book. Browse destinations or check out what's popular.
Join 813 other subscribers