browsing a used bookstore a few months ago, I peeked into the travel section to see if they had anything on Italy. Amid abandoned copies of Under the Tuscan Sun, I found Tilt: A Skewed History of the Tower of Pisa.

Confession: I’m no history buff. I don’t read all the plaques at museums, and I don’t seek out history tours. I appreciate history, and I like to understand its cultural relevance, but that’s about where it stops. It’s really not like me to voluntarily read an entire book on a monument’s history.

But maybe it’s something I should start doing.

Reading Nicholas Shrady’s Tilt turned Pisa into an enlightened experience. Originally a check-it-off-the-bucket-list side trip, it turned into several hours of walking around the Piazza della Miracoli, taking in the cathedral, the baptistery, and the camposanto — in addition to the tower. Truth be told, I was more mesmerized by the cathedral than the tower after reading the book, and I’m inclined to agree with Shrady that it may be one of the prettiest churches I’ve ever seen.

The most intriguing thing I learned from Tilt was how seriously Italians take their bell towers. Love of your town and love of your bell tower are so intertwined that in Italian, campanile means bell tower, and campanilismo, which doesn’t really have an English equivalent, refers to a sense of identity and town pride.

I also learned that Pisa was once powerful and wealthy, one of the most influential regions in Italy. The Tower of Pisa was meant to encapsulate that status, to be the ultimate tribute to campanilismo. Unfortunately for Pisa, its signature lean would signal the city’s decline, and Pisa would enter a dark period of near obscurity. 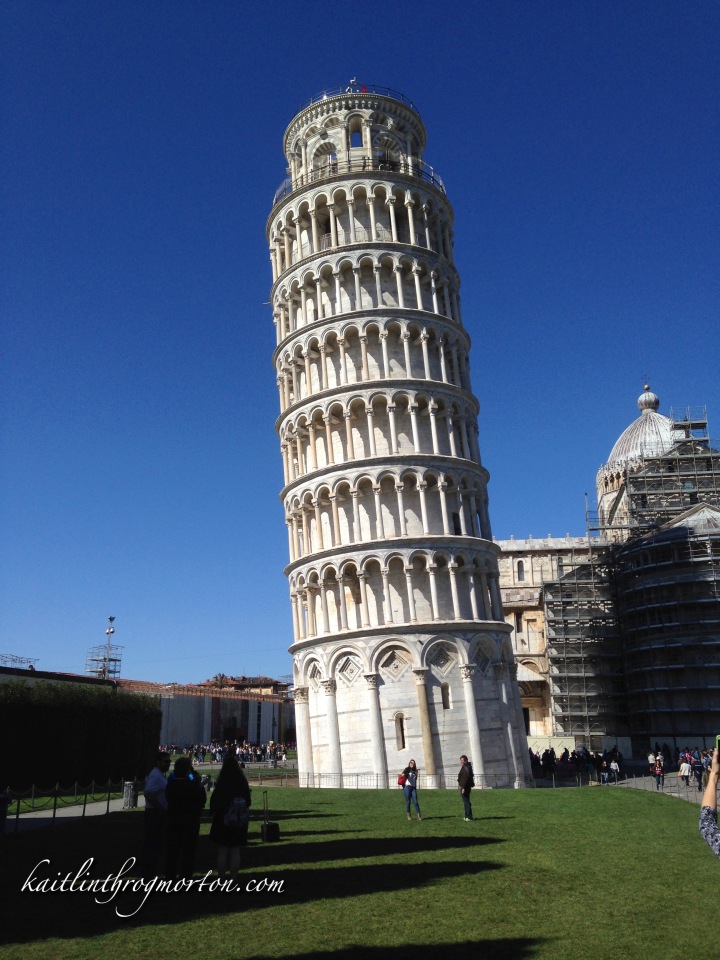 But then as the book progressed, I learned what made the Tower the object of not just Italy’s, but the world’s, affections. A combination of its survival through multiple catastrophes, its popularity with writers like Lord Bryon and the Shelleys, and then its discovery by World War II soldiers propelled it to fame. It took 17 commissions and the tower’s near collapse, but John Burland and a team of engineers finally came up with a stabilization plan involving soil extraction from the tower’s base — one that maintains the lean, of course! — that is said to keep the Tower from crumbling for another several hundred years.

As for our visit, the whole plaza is spectacular. Until you see the Tower for yourself, it’s hard to imagine how truly skewed it is. You don’t realize how severe the lean really is until you’re standing under it, thinking maybe you should walk a little faster. I also had no idea just how striking it is compared to most other bell towers in Italy. I found it much more impressive and detailed than any others we saw. Whoever its builder was, they knew how to make something stand out, lean notwithstanding.

Beyond the Tower, I really enjoyed the rest of the plaza. The cathedral, which is the centerpiece of the Miracoli, is a beautiful blend of the cultures that were warring for prominence in the 1100s, displaying both Islamic and Protestant styles and forerunning some Renaissance motifs.

The baptistery is simple compared to the rest of the plaza, but it’s still impressive, and if you explore inside for long enough, you’re likely to catch an “echo test” in which a tour guide will sing several notes in succession, which will all echo around the structure.

Also not to be missed is the camposanto, or the cemetery. It underwent extensive reconstruction after it was bombed during World War II, but you can still view most of the interior as it originally was, complete with tub-like tombs which rest above ground. They’re currently working to restore the many frescoes that lined the walls, and you can explore a small exhibit inside on how they’ve been able to do that so far.

While our stay in Pisa was short, all in all, we were only there for about three hours total, I’m so glad that we took the time to see more than just the Tower of Pisa. And I’m also glad that we didn’t leave this half-day stop off our itinerary, it’s worth your time — even if only for a brief visit! And if you get a chance to read Tilt, too, you’ll appreciate the experience even more.

This post is part of a series on my trip to Italy, featuring city guides, tips, and more.