A month ago, I wrote about my time in New Orleans, talking about classic highlights like Bourbon Street and streetcars, along with some lesser-known finds like the Pharmacy Museum. But I had so much to share with you in that post that I promised a separate one on the food, and here it is.

Food is such an important part of traveling for me, and one of the most enjoyable. To me, eating is as much a part of exploring as seeing landmarks, and I’m always looking for eateries that impart a place’s culture just as much as a museum can. Small establishments, local ingredients, and time-honored flavors are what I’m after.

New Orleans did not disappoint in this department! Its food is just as vibrant and exciting as the city itself, and I’ve got nine places you should check out when you’re in the Big Easy.

In my opinion, these two are unmissable. Both make my mouth water just writing about them, and both were busy and patronized by locals, always a good sign. 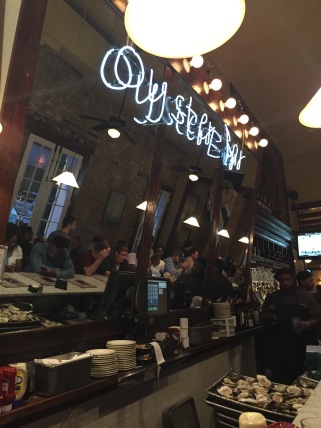 Royal House Oyster Bar: When I’m this close to water, local seafood is a must. I debated between many options, but I’m glad I went here. Royal House struck the perfect balance of serving both delicious and creative food without being pretentious. No frills, but not exactly simple, either.

Of course, it’s an oyster bar, and the oysters were plump, juicy, and fresh from the bay. And if you want them dressed up, Oysters Duo is the way to go.

But what I really want to talk about are Royal House’s redfish beignets. Yes, fish doughnuts. I wouldn’t have done it but for the insistence of two locals next to me. At their urging, I made my first foray into the French beignet a fishy one… and am happy to say it was delightful. Redfish is very mild, and the combination of savory and sweet, tender and crispy, is a wining matchup. If you’re feeling adventurous, be sure to order them! Website | Menu | French Quarter, 441 Royal Street.

Cochon Butcher: It might not be standard NOLA fare, but Butcher is making a name for itself with house-cured meats and freshly baked bread. Not to be mistaken with its fancier sister restaurant, Cochon, this place is a butcher shop and sandwich counter. Be prepared for a line if you go at lunchtime, it’s wildly popular!

I ordered their signature muffaletta — which was all kinds of wonderful with a fresh sesame bun, olive salad, and practically an inch of meat! — and took a seat at the bar since the rest of the place was crowded. I got to talking with my neighbor, a local who eats at Butcher nearly every day, about New Orleans and how it’s changed over the past decade. In fact, it was such a friendly, lively conversation that the gentleman bought me one of Butcher’s double chocolate cookies. The conversation and the cookie were yet another proof of how warm and inviting New Orleans and its people are — so many people I encountered loved their city, and loved sharing it. Website | Menu | Warehouse Arts District, 930 Tchoupitoulas Street. 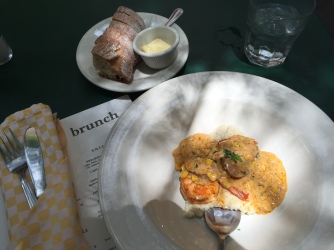 Cafe Amelie: Nothing I did in New Orleans felt more deep South than this place. The outstanding service, the menu, the courtyard seating — it’s like you’ve been transported to a time of mansions and leisure. I came for Amelie’s Saturday brunch, for which I had to wait an hour for a table for one, but it was worth it. I ate fig and goat cheese toast along with shrimp and grits. Both were elegantly prepared with surprising bursts of flavor that belied the delicate setting. If you’ve got the time and you want to experience the marriage of Southern and French, Cafe Amelie is perfect. Website | Menu | French Quarter, 912 Royal Street. 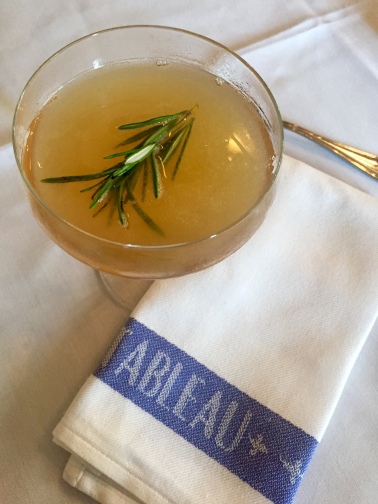 Tableau: For classy atmosphere, inventive drinks, and carefully prepared French and traditional New Orleans fare, Tableau checks all the boxes. I ordered a chicken and brussels sprouts crepe along with duck and andouille gumbo. Both were full of flavor, and you could tell they were prepared with careful attention to detail. And my drink, the Just As Well with whiskey and rosemary, was on point. Though I didn’t get to sit there since it had just rained, reviews raved about the view of the cathedral from Tableau’s balcony. Website | Menu | French Quarter, 616 Saint Peter Street. 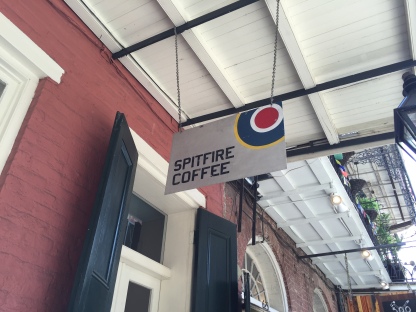 Spitfire Coffee: Right in the heart of the French Quarter, this place is tiny, but they serve single-origin coffees and pour overs. It was sweltering and humid when I stopped in, so I opted for iced coffee, which was smooth and satisfying, and just what I needed to jumpstart my afternoon of exploring. Website | French Quarter, 627 Saint Peter Street.

French Truck Coffee: This shop’s welcoming exterior matches the friendliness of the baristas and the brightness of the small batch coffee they roast right in the back. It was another hot day, and I was eager for a pick-me-up after my filling lunch at Butcher, so I got their shakerato — two espresso shots over ice with a dash of simple syrup and sugar rim. Refreshing and yummy! Website | Garden District, 1200 Magazine Street.

For Drinks with a Spin: The Carousel Bar at Hotel Monteleone

The Carousel Bar at Hotel Montelone: Yes, it’s a real working carousel! Hop on for a leisurely spin and an old-fashioned drink: my choice was New Orlean’s own sazerac. And as if the carousel isn’t enough of a novelty, Hotel Monteleone has a storied past, housing the likes of Hemingway, Faulkner, Grisham, and many other authors. The hotel even has literary suites, but seeing as they start around $800 a night, I think I’ll stick with a sazerac on the carousel. Website | French Quarter, 214 Royal Street. 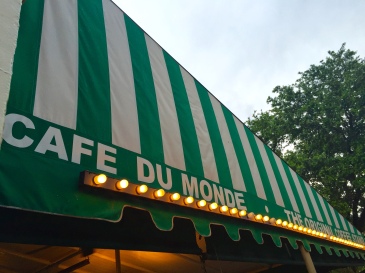 Cafe du Monde: What list of New Orleans’ food would be complete without including Cafe du Monde? You can’t beat the simplicity of fried dough rolled in powdered sugar, or the affordability at $2.42 for three doughnuts. There’s a reason this place usually has a line out the door, so be sure to stop in. Although if you want to avoid the line, my Monday evening visit, around 9pm, was calm and wait-free. Website | French Quarter, 800 Decatur Street, the original + additional locations. 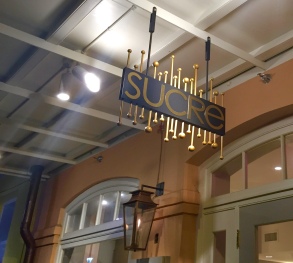 Sucre: Compared to Cafe du Monde, Sucre is a newcomer to the sweet scene, but if you’re looking for award-winning pastries, especially some of the best macarons I’ve had outside of Paris, look no further. I ended my time in New Orleans here, savoring a chicory macaron before catching my plane home. Website | French Quarter, 622 Conti Street + additional locations.

What kind of food do you like to eat when traveling? Have you been to any of these places or have a New Orleans recommendation to add? Share in the comments!

12 thoughts on “Eating My Way Through New Orleans”